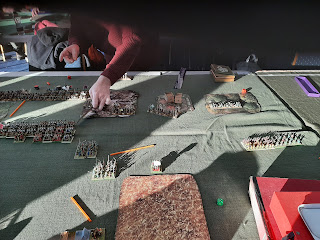 This was a tough game against a Chinese army that was a near mirror image of mine. My opponent was Mark Hargrave. I put my Chariots under a Talented Instinctive Sub on the left, 2 Polearms in the centre and the rest of the command was an 8 of Devastating Chargers with a 9 of Bow Skirmishers. The CinC is very stretched, I took a massive risk. Lots of anti chariot terrain suits Mark's army. The Tsu in Loose keeping the Barbarian Light Cavalry in Skirmish in rough terrain. Renders them quite unthreatening apart from their shooting. I've started to do damage and am picking on the mixed units. Only 1 shooting base per file, so he's only using black or white dice at best. Picture includes my opponent from the last game against the eventually winner, Minoans vs Saitic Egyptians. I think we'd both lost a couple of units by now, but I had a slight advantage. My mounted Polearm Melee Expert was paying off in the long run against Mark's Chariots. Another advantage is that bec
Post a Comment
Read more 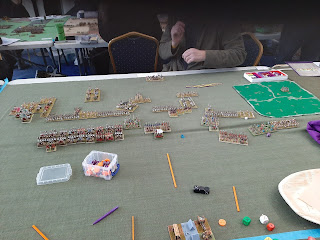 So after winning the first round of Warfare, I was playing Lance Flint with one of the 5 Minoan armies. Honestly, a Minoan is one of the armies that counters 5 Hegemons so I didn't feel confident going into the game. A wall of Chariots against Long Spear, with Skirmishers intermingled, and Superior, Fully Armoured Long Spear Chariots behind. My only saving grace is the Spears are 2 deep, and my shoot and charge negates shield cover. The Spears are starting to get beaten. I think the Chinese have lost 2 units though, 1 being the 4 of Chariots. I lost the Skirmishers again, as well as the Devastating Chargers. Things are looking bleak for China. My Tsu were never going to survive a 3 sided assault. Funny moment, 2 black dice = 2 wounds. I believe Lance lost one of his Dendra, a Javelin Chariot, 2 Spearmen and a Slinger Sug. I lost my army, but look at how badly damaged at least 2 Minoan Tugs are. 15-9 to Lance leaves me in joint 10th if I recall correctly. The draw for round 2 of Wa
Post a Comment
Read more 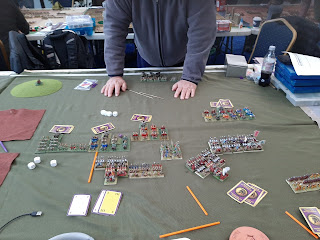 First of all, I'd like to say that at Warfare just over 2 weeks ago, I had my most enjoyable and fun competition that I've ever had. The fact that games don't often end in bloodless draws is part of the reason as well as the decisive nature of the scoring system. Chinese counter the Hittite and Mitanni Chariots with their own Chariots and Tsu, the latter in Close formation. A few Chinese units hanging back on the right.  Shoot and charge is not a Mitanni Chariot's best friend. One Chariot has been hit in the flank, but the unit to its front could die at any moment. Casualties so far on the Chinese side. My opponent has 1 point from running down my Skirmishers. 2 Mitanni Chariot units a wound off breaking. Possibly advantage Chinese at the moment. So far the score is 4-1 to the Chinese, who have killed 2 Chariot units. My opponent sensibly pulled back the first Chariot unit that suffered casualties. A few Chariots are isolated on the Chinese side. More Chinese Casualties
Post a Comment
Read more

Opening deployment of the armies. The Lshape deployment of my infantry was to prevent the Tsu from getting hit too early. In MeG, there is a 1BW follow through into combat rule. My Chariots wheel to face off Lawrence's Chariots and Bow unit on the flank. The Chinese infantry move closer and closer to the rough. Same photo as the previous one. The Skirmishers are about to earn their shooting stripes. Lots of action here. The Chinese Chariots advance forwards while the Egyptian Chariots on Lawrence's right fall back. The 6 of Chariots on his left meanwhile charge the Skirmishers, catch them, and suffer 3 wounds from white dice shooting. I do however have Chariots behind my infantry. Ugh. The Skilled Nubians were scoring a steady trickle of damage, but not quite enough to break the unit if Polearms facing it. The Libyans are behind the Nubians ready to charge next turn. In the end, I lose a Polearm unit, a 6 base Chariot unit and the Skirmishers. However I've taken out 2 Chari
Post a Comment
Read more

Game between the 5 Hegemons and Neo Babylonian 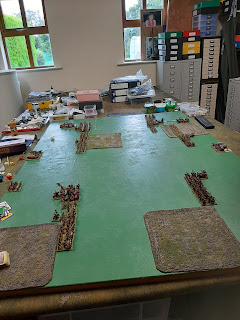 The armies set up. All the terrain on table is rocky ground. Great for my Infantry. Getting ready to charge a bit too late in the game. The Chinese Chariots are getting beaten up but have taken some units down. Note the big slog between 2 Babylonian Heavy Infantry units and a Polearm unit. The Polearms should be dead by now (handbags at dawn). Into shooting range of the Skythian mercenaries. My shooting was generally rubbish throughout the game. Some casualties on the Babylonian side. The score will be 8-6 in favour of the Chinese after this round, 2 points coming from a very weak Babylonian Archer unit. A couple of dead Chinese units. Final Babylonian casualties. In the end the Polearm unit on the Chinese right broke a Cavalry unit. As mentioned before, the weak Archer died as did the Sparabara and a Chariot unit. The Chinese lost their army eventually, but it was extremely close. Not much left on table. Main lessons from the game: when you have a chance to potentially get out of a si
Post a Comment
Read more

Game between The 5 Hegemons and Minoans 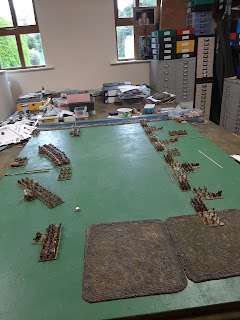 Tough fight between Spears, Libyans and mixed units. The Skirmishers can now charge a flank.  Those Chariots on the Minoan side are nasty. Lots of casualties on the Chinese side.  The Minoans are suffering but have the upper hand. How that Chinese Chariot unit survived I have no idea. It was however responsible for killing a 6 of Archers because of the ability to follow through with unengaged bases. A few more casualties on both sides. How the unit hit in the flank by a full strength long spear unit survived to the next bound, I have no idea.  I believe the Chinese lost 15-6 in the end, having taken down a Long Spear unit, an Archer unit and 2 Sugs. This was a very bloody fight as well. Once Long Spears are down to 1 base in any of their files, they are dead against decent Mounted.
Post a Comment
Read more

Game between Imperial Romans and Gepid 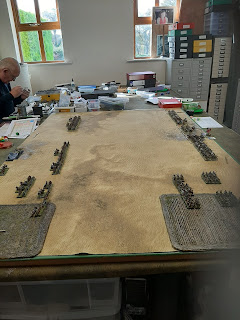 A small bit of rough terrain on table and good lineups. The Romans are on the left, the Exceptionals I believe facing close order Flexible Warband in rough terrain. Romans are pushing forward aggressively, the Gepids are reorganising. a very wide Superior Legion facing off 2 Cavalry units. Beaten up but alive Gepid Cavalry having beaten the entire Roman mounted left wing. Dunce cap required for me. I'll elaborate in the summary. Gepid casualties so far. Mass of Roman casualties.   The Romans eventually picked off one Gepid Tug. They however lost their army. I will say though that a few Gepid units were a bit worse for wear so I could have picked up more units had I survived. The dunce cap moment explained: I was too aggressive with my Cavalry. Yes mine were better than Ian's mostly, because of the Armenian ally. The mistake was advancing without proper flank protection. I should have come in at an angle rather than in a straight line. 15-2 to Ian was the final result.
Post a Comment
Read more
More posts